The Beginning of the End?

Share All sharing options for: The Beginning of the End? 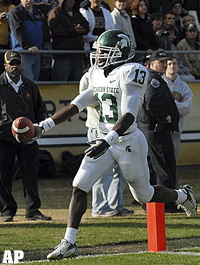 Today was our worst-case scenario for the rest of the season, as we finally had our token game where we lose to a team we should easily beat. It is a proud tradition started by Toledo in 1997, and continued through today. Not only did we make way too many mistakes against a surprisingly crisp and motivated team, but off the field things happened in the conference that hurt our bowl positioning even more.

When the day started we looked to be a strong candidate for Outback bowl and, with a little help, maybe even the Capitol One Bowl. Now we may indeed return to Orlando, but it would be for a lucky appearance in the Champs Sports Bowl again. Most likely we’re headed west to the Insight Bowl at best. While that means we have a better chance to get a win than we would against a tough SEC opponent, if we play like we did today it won’t matter.

Ohio State’s shocking loss not only lessens chances for two BCS bids from the Big Ten if Michigan wins next week, but it vaults the Illini easily ahead of us regardless of what they do next week against Northwestern. Wisconsin beating Michigan and finishing with Minnesota means they are now securely ahead of us bowl-wise, and we already knew there would be no catching Michigan or Ohio State. Now we can’t even catch Penn State if they lose next week, meaning we’re no better than sixth right now.

This also places pressure on us to keep the bucket next week, because a loss there and another Michigan State win at home (which is highly possible) drops us to eighth at best in a possible 10-team pecking order. Both Indiana and Northwestern have a ton to play for next week by securing a seventh win, so do not count them out.

While I had hope that we had begun to turn a corner by having a close game last week I now see what others have seen for a long time. We are a program on a decline and we desperately need a win in the bucket game to save some face. Who knew beating Indiana would be a saving grace again for us? Consider who we have beaten this year.

Toledo – While they have played well of late, they are still a 5-5 MAC team. At least it was a road win.

Central Michigan – At 6-4 they may be our best win, but they still got annihilated by 1-AA North Dakota State. At least we may get a rematch in Detroit.

Minnesota – Another ND State victim. Easily the worst team in the conference and one of the worst in D-1A

Notre Dame – This used to be a proud moment for us, but they’re 1-9 meaning beating them means nothing.

Iowa – How different would this game have been if not for suspensions and injuries? At least this is likely a seven win team and win over a bowl team.

Northwestern – This is a very up and down team we got on a down day.

I am not saying we would have been that much better if we had won today, but my goodness we came out flat on a day when we needed a good start more than ever. Even the senior day festivities seemed very subdued and there was almost no energy in the stadium at the opening kickoff. We seemed to overcome this defensively early on by shutting down the run, but as we know that meant nothing. Michigan State is a team that wanted to run the football and they are good at it. The fact that we stopped them at this and made them change their game plan, yet they were still very successful is incredibly frustrating. There was some good this week, but it vastly was outweighed by the bad in a craptacular performance.

Kory Sheets – When he was given the ball today he was money. 80 yards on six carries, 41 yards on two catches and two long touchdowns made him the most productive member of the team today. It’s a shame we couldn’t have gotten a lead because when combines with Taylor’s effort today we could have ground out the clock with a two-headed monster in the backfield. Unfortunately we never were able to get a stop and test that theory. Sheets made a pair of great plays on both his scores and played well up to his potential.

Curtis Painter – From my view at least, Painter’s two interceptions were at least aggressive. The first one was him throwing to an open Dustin Keller who would have caught the ball in stride and had a big gain. Sir Darien Adams read the pass perfectly and made a nice play. The second was a very similar type of play by the same player. Those were the only two mistakes by Painter in what was otherwise one of his better games, but unfortunately they were very costly mistakes that led to 10 points. Since we only had the ball for little more than 20 minutes Painter was very effective in those 20 minutes gaining more than 500 yards and scoring 31 points. That should be enough to win any day.

Jake Standeford – If we had just a few more kids on this team with his attitude we would be nearly unstoppable. Here is a guy that came to Purdue and was an invited walk-on mostly as a courtesy to his record-breaking brother. He busted his ass, actually found the field, and gives us the never quit attitude we sorely need. He never filled the stat sheet, but he did everything asked of him and anything possibly to help the team. He made most of his hay late today, but it is a testament to his character that he was still fighting out there. I will miss Jake Standeford, and I hop he can transfer his attitude to a few guys before he leaves.

Brock Spack – Something needs to be done with him. Those who read this blog know that I am generally very forgiving when it comes to our coaching staff, but his performance today was embarrassing. Devin Thomas was absolutely killing us, especially on third down, but even in the fourth quarter when we desperately needed a stop he was still being covered one-one-one with a 10 yard cushion. 10 catches, 112 yards, and every time on third down all Hoyer had to do was throw to him and he was still open. A couple of our rare third down stops were because Thomas dropped an open pass. This is an appalling failure to adjust to game conditions, and it needs to stop now.

Dropped passes – These absolutely killed us early when we could have built a lead. Orton dropped some big ones on our first couple of drives and Keller had a huge drop of an early first down. Our first drive ended due to dropped passes, and I wonder how different things would have been if we had gotten an early lead when the defense was actually playing well.

The Defense – Not only did we give up 48 points, the second most of the Tiller era next to the Notre Dame game two years ago, but we allowed Michigan State to hold the ball for nearly 40 minutes. Our offense was hot, and if not for the three turnovers leading to 17 points we easily still could have won with that time discrepancy. We couldn’t get a stop, and even when we did like on two field goal attempts we made a penalty to keep drives alive.

A lack of discipline - It was still barely a game when we succumbed to poor tackling on the fake punt. It was easily still a game when we jumped offsides to give them three points before the half. The crap face mask call on the fake field goal gave them another three points. Simply by screwing up we handed Michigan State 27 points via turnovers, boneheaded penalties, and general dumb play. In turn Michigan State gave us three points, as their PI call on our field goal drive kept it alive. I’ll give credit where credit is due because Michigan State played nearly flawless and simply made us pay dearly for all our mistakes. This was the biggest factor in today’s game.

Michigan State played a great game. They were motivated, they were confident and that grew as the game went on, and they turned a corner of their own today. I really don’t know what to do next for us. Right now I feel like I have been punched in the gut, and even if we beat Indiana and win our bowl game I feel like we took a severe step back today. We have an incredibly difficult schedule next year, one where nearly every team we face will be getting better while we will probably be a little worse. We may be more balanced offensively and defensively, but what good that will do I do not know.

I really feel for our seniors today, who were all surprisingly quiet aside from Standeford and Dustin Keller. Yeah we had seniors as our three leading tacklers, but the defense played so badly, especially on third down, that I can’t single anyone out as having a good game. We packed it in after Armstrong shanked a punt that could have pinned the Spartans deep, and we failed to truly stop them the rest of the way.

We can only control what we have in front of us now, and right now that is Indiana and a mystery bowl opponent. There is no reason we cannot win either of those, but we have to recover quickly lest we have the bucket taken from us by a very hungry Indiana team. After that, your guess is as good as mine for next year.