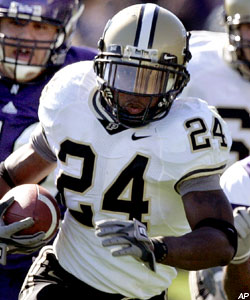 I am hoping that my recent history of going to see Purdue play on the road is wrong. I have been attending at least one road game since the 2000 season and in all but two cases my first visit to a new venue have ended with a trademark stomach-punch style loss for the Boilers. Here is Purdue's record when I see them on the road, with the year and result of the first game I attended at each venue.

A 6-6 record on the road is pretty good on the surface, but I am really tired of getting my guts ripped out, then having a 3-4 hour drive home for the privilege. I'm beginning to wonder if I am simply a bad luck charm and if I should stop going to road games altogether. Even my Miami on-the-road record is 0-1 after last year's disastrous showing in Louisville.

Anyway, it's a big week in the Big Ten as most of the games are all about bowl positioning. Ohio State plays out of conference guaranteeing they will stay undefeated and at the top, but everyone else faces a big game that will go a long way towards deciding what their postseason destinations will be. While the Buckeyes are the only team already at six wins, four more can join them with a good week this week. One of the teams aiming for number six is playing in this week's Big Ten Game of the Week.

It will probably be a very long time before the Boilermakers get as good of a shot to pull off a win in Ann Arbor. During Purdue's last three visits they carried a 14-1 combined record into their game at Michigan plus a top 10 ranking. They have lost those games by a combined 93-25 score to quickly fall out of the top 10 each time. That's a pretty rough history to face even if it hasn't been 41 years since your last win in a venue. Michigan has been about as unimpressive as a 4-2 team can be, struggling to get past Eastern Michigan and Northwestern in recent weeks.

If there is one thing Purdue has always been vulnerable against though it is a team with a good running back. Right now there are few in college football better than Mike Hart. As a true freshman three years ago Hart ran for 206 yards and the Wolverines' only touchdown in a 16-14 win in West Lafayette. If he gets on track early Saturday he could be a great equalizer. He's going to get his yards, it is just a matter of Purdue's offense recovering and actually doing something in Ann Arbor for the first time in decades.

Purdue has never had a better shot to win in the Big House than they do this year. All the offense has to do is get back on track, run the ball semi-effectively without abandoning the running game, and not turn it over. Michigan is vulnerable against a spread attack, has poor special teams, and is a team struggling in both the red zone and passing the ball despite having very talented receivers. I know I predicted a big loss for the Boilers in my preseason preview, but that is before seeing both teams play. If Purdue can't win this year, it may be another 40 years before we finally do.

Someone stick a fork in the Hawkeyes because they look done. Since thoroughly dominating Purdue last year they have fallen completely off a cliff and can't seem to get anything going offensively. Even that solid defensive line is going to get tired if the offense can keep the ball for a few minutes to give them rest. Right now all you have to do to beat Iowa is build a lead early then bunch up to stop the run. The bowl hopes are fleeting, but Iowa desperately needs this game to keep them alive. Facing a hot Illini team will not get the job done.

This has the potential to be blowout city if the Illinois defense plays to its ability. Everyone seems to be kicking the Hawkeyes while they are down and I honestly see no way that Iowa can win this game if Illinois merely plays their style of football. Iowa only has a shot if Illinois gets turnover crazy and completely falls asleep defensively.

It's time to officially label the Wildcats as "punchy" because they will not go away against anyone. Northwestern gave Michigan a pretty good fight two weeks ago and then shocked Sparty on the road last week. Now a win against lowly Minnesota can officially begin the bowl discussion again, which is a miracle after losing to Duke. I like the Wildcats offense, and they have shown that they will be in every game as long as they are moving the ball.

Minnesota's problem is clearly its defense, particularly against the pass. This is not good news considering C.J. Bacher lit up Michigan State, a pretty good defensive team in the first part of the season, for 520 yards through the air. At least Minnesota has been able to score a bit on its own to make games fun. In watching part of last week's IU game at lunch today (on one of four TV's in the free world that gets the Big Ten Network) they were able to move up and down the field with IU at first before bogging down. Look for another game this week in which both teams are in the 30's

I am going to be really, really mad if Kent State shocks the world and pulls this game off in the 'shoe. What we have seen from Ohio State so far is that they have the capability to shut down any offense no matter who they're facing at home or on the road. The defense is like Mariano Rivera in October right now. If you give Ohio State a two score lead it is game over. Now we're expecting a Kent State team that has lost to Miami (OH), and Akron to compete? Look for a methodical, go through the motions type of win this week.

Penn State is already out of the conference title chase with two losses, but it can sure play the role of spoiler with games left against Wisconsin, Indiana, Ohio State, and Purdue. Against a slate like that they can at least get back into contention for a New Year's Day bowl quite easily, and that will begin this week against Wisconsin. Unfortunately they have had a bit of ugliness hovering over the program this week with Austin Scott getting kicked off the team, then accused of rape. This doesn't even take into consideration JoePa's road rage incident.

This has the makings of a defensive slugfest, but it will probably turn into another shootout like Wisconsin's last two games have. Penn State is helped by the fact P.J. Hill is a little banged up, thereby evening out the running games a little. Tyler Donovan is playing better at the quarterback position than Anthony Morelli, so I will give him the edge. And I thought at one time Penn State only had a difficult game at Michigan standing between them and an unbeaten season because they got the next three biggest Big Ten teams all at home.

If Indiana wins this homecoming contest on the road we could be living in a scary new world on Sunday afternoon. According to the Indianapolis Star, the Hoosiers were last ranked on September 20, 1994. Being just outside the top 25 this week and with one team (Florida State) having already fallen at the bottom of the polls a win will not only guarantee they will "play 13", but it will possibly put them in the top 25. It will be a bizarre world when long time programs like Notre Dame, Miami, Florida State, Nebraska, and Michigan were not ranked but Indiana is. I think I will begin stockpiling canned goods just to be safe.

On the other side, I almost feel sorry for Michigan State fans, as a loss this week would most likely mean an 0-4 conference start after starting 4-0. Even a new coach hasn't been able to turn around the sudden freefall of this team, as people are selling on them faster than Enron. If they lose this game an almost sure bowl bid will be in jeopardy as they face a final three of Michigan, at Purdue, and Penn State needing one win to get to six. Who knew the day would come when Michigan State would need this more than IU. Unfortunately, the Hoosiers are playing too well right now and I don't think they will blow the first of six chances to get that sixth win.

Maybe it is the black and gold color scheme, but Missouri is really beginning to grow on me. For them the Illinois win to open the season is looking better and better, and they can take a major step forward in this week's first national game of the week: #11 Missouri at #5 Oklahoma. My only glimpse of Oklahoma was during the rain delay of the Eastern Illinois game when they pounded Miami in Norman. Since then they have a WTF type loss at Colorado. Missouri seems to be getting stronger as the season goes on, and a win here put them in the Big 12 driver's seat. Oklahoma is the better team though, and they are at home. Oklahoma 24, Missouri 20

The second game I will take a look at is #1 LSU at #18 Kentucky. The last few weeks have proven that no one is safe from getting beaten, and a win by the Wildcats here would through almost everything out the window. Paired with Missouri above these dueling Tigers represent two of just ten undefeated teams left. Since no one loss should ever be placed in the national title game ahead of an undefeated BCS conference team a loss here shove LSU back in line waiting for six more teams to lose. One of the unbeatens is Hawaii, who with an incredibly weak schedule will only get into the title game if several teams lose two games. Even then it's not a guarantee. I like the moxie of Kentucky, and think they have the home field to pull it off. Kentucky 24, LSU 22