Time to start climbing the ladder

Share All sharing options for: Time to start climbing the ladder 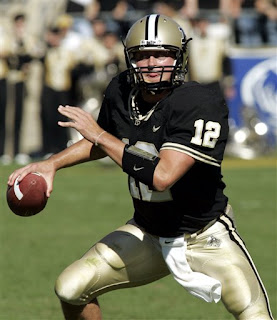 Well, we are bowl eligible for the 10th time in 11 years. Considering that we had only been to five bowl games period before this current stretch that is a great accomplishment. I know the team has taken a lot of flack recently, but congratulations to coach Tiller and company for helping achieve this milestone that a lot of teams can't brag about right now. I know we are far from where we want to be as a program, but we are also far from where we used to be. I won't settle for what we have because we still are short of competing for championships, but I definitely prefer it to what was here before.

Another key point that cannot be overlooked in this is that coach Tiller is just three wins away from tying Jack Mollenkopf as the all-time winningest coach in Purdue history. Mollenkopf also achieved his 84 wins in 15 years at Purdue, while Tiller has been here for just 11. Mollenkopf's overall record was 84-39-9 while Tiller is currently 81-49. While it's not as stellar of a percentage wise it is still a nice achievement.

Let's move past the coaching situation though and back to this season for a moment. Being bowl eligible means we now have a chance in each of the remaining four weeks to climb the ladder to a better bowl game. This is important in a year where as many as ten teams, if things break just right, could be fighting for seven spots. We now know we are ahead of Iowa, and each of the next four weeks we have a chance to slot ourselves ahead of other likely bowl-bound teams. We cannot control our destiny when it comes to getting ahead of Illinois and Wisconsin, but we can put ourselves in position to finish a strong third in the conference. If we continue to play like we did today we have a very good chance of doing just that.

Purdue won, Indiana lost, and Notre Dame got shut out at home 38-0 and clinched a losing season. Since Miami also beat Florida State that made for the perfect day college football-wise. Of course, I don't know anything since I am simply a biased fool according to some for picking the Irish to start 1-7. I admit I was wrong. I was optimistic in giving them the one. UCLA ruined it for the rest of us.

Seriously though, there was a lot of good out there today. For the first time since playing Illinois during the 2005 season we kept a Division 1-A team out of the end zone. The one time Iowa seriously came close we were able to make a big play and intercept the ball. That led to one of my favorite types of drives and one that we have not seen out of Purdue in a long time. Iowa was obviously driving to score out of desperation before the Vinson interception. Once we got the ball back starting on our own two we made a long, grinding drive with our running game against a good run defense. Sure we didn't score, but we milked the clock down to the point that even the most miraculous of comebacks was unlikely. It was a brutal, ball-control drive and the drive of drive that good teams make to close games.

On that drive Taylor and Sheets were brilliant. For the first time this year we faced a good run defense and actually committed ourselves to moving the ball on the ground. We didn't have a ton of success at first, but both backs were able to wear the defense down to the tune of 71 yards and a touchdown for Sheets and 67 yards for Taylor. Imagine how much better things would look if Painter wasn't sacked twice for 22 yards. Sheets and Taylor were almost dead even in carries as well, proving that while Sheets can be dominant against lesser defenses, we need the balance of Taylor to make some hay against good defenses.

Speaking of Taylor, what else can you say about this young man? For some reason this young gentleman makes us a better team not just with his play, but with his attitude as well. Five weeks ago we were questioning if he was going to be back at all this year. Now he comes back a week early and helps to re-ignite our offense. He doesn't have a monster game and doesn't dominate, but his play seems to infect our entire offense. Even Sheets plays better with Taylor back there to balance him.

Offensively we had our best game in week by getting over 400 total yards, finding the end zone in each quarter on long drives, and getting more than 100 total rushing yards. That's an easy equation for us to equal a win. We're not a team that can win by throwing the ball 60 times for 400 yards. We need a running game to give us some balance. If you look at our numbers historically you will find that in games where we get as little as 100 total yards on the ground we are very hard to beat. I would give an exact number, but I am too lazy at the moment to look up the exact stat. Since this is a one man operation I don't exactly have the Elias stats bureau backing me up. When I play as Purdue on my playstation game (a game, I know, but bear with me) I like to have a goal of three passing yards for every rushing yard and gaining 400 total yards. It's very hard to lose when you do that in the game, and the same is true in real life. We did that today, and won by 25 points.

On the other side of the ball the defense had a great day. I don't care that it came against a depleted opponent; we kept a Big Ten team out of the end zone. We were able to get in the backfield and cause pressure almost all day and we kept Sims and Young from having a big day against us like they did last season. The offense did its part by building an early lead against an opponent that has struggled to score point all year. The defense did their part by making sure that opponent didn't wake up today.

Come on Joe! You have a kicker that made two field goals from 47 yards last season when he was struggling. This year he is performing much better and has proven he has plenty of distance to make it, yet you go and punt from the 31 yard line? That was just an inexcusable and, pardon my language, a chickenshit coaching call. Not only did Tiller do this once, but he did this twice by going for it on fourth down from the same spot on the field. At least going for it was a little more ballsy, but it is still a lower percentage play against a good defense. Show you believe in your improving kicker by trotting him out there and giving him those kicks.

The only other problem I had today was our inability to wrap up ball carriers in the backfield Christensen regular broke out of sure sacks and continued to find a wide open James Cleveland. I have never even heard of this guy, but we left him so open he had a day like Antonio Gates. He was left open on too many plays, but about half of his catches could have been prevented if we had been able to just tackle the quarterback. This is a case of taking the good with the bad though since we were at least getting to Christensen in the first place.

Today we dominated a team that was all defense and no offense. It was a very business-like performance and it's hard to not be pleased as a Purdue fan today. Next we have a team that is almost all offense and no defense. We should have no trouble moving the ball against Northwestern, so if we can slow them down after they've been on a roll of late we should be able to win. A win would also put us ahead of them slotting-wise and practically guarantee a bowl game regardless of what happens the rest of the way. At the very least it would likely means we'd be no worse off than eighth bowl-wise out of ten possible teams, and that means some conference that does not fulfill their bowl commitments would likely pick us up then in a worst case scenario.