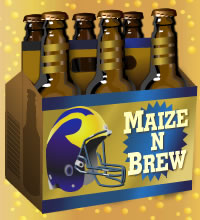 This week Dave from Maize N' Brew shares his thoughts in a Q and A session with me on this week's game in the Big House.

Off the Tracks: Purdue has not won at the Big House since 1966 when Bob Griese wasquarterback. In that time they have sent some very good teams upthere, but have had just two out of 16 games since then at Michigan end with Michigan winning by less than two touchdowns. What's the story behind this domination when so many other schools have had at least one good day up there in 40 years?


Maize n Brew: So what you're saying is... you're due? Ask Navy How Much They're Hoping this Actually Means Something Against Notre Dame This Year.

I don't think there's any jedi mind trick, rhyme or reason for Purdue's struggles in Ann Arbor. The answer has been pretty simple, talent differential. While no one can argue the Boilermakers haven't upgraded their overall talent since Tiller's arrival, no one will argue that they're bringing in top ten classes either. Even when Purdue has shown up in Ann Arbor with arguably better teams Michigan's talent and home field advantage have trumped that. I also think Purdue has an amazing ability to catch Michigan at the wrong time. Somehow they always get Michigan on a streak or on the rebound.

No matter what the real reason is (talent, luck, voodoo curse, globalwarming, etc...) I think you can "throw out the history books" this year given both teams' play to date.

OTT: Why is Michigan struggling so much this year against the spread offense?

MNB: Replace "Spread Offense" with "Mobile Quarterback." Also replace "this year" with "since the dawn of time." If I could answer this question my season tickets would be significantly better. And on the sideline. With a head set. Ah to dream.

Back to the question. Under Carr's tenure Michigan has always managed to turn mobile quarterbacks into world beaters. It's not because there are four receivers on the field. It's not because our guys can't get pressure. To me it's a coaching philosophy, especially this year, that is so risk averse it can't decide what it wants to protect against: e.g., QB running, QB throwing. So we end up getting the worst of both worlds because we're half protecting against the run and half the pass which leaves our defenders back on their heels and out of position to make a play. Pick one dammit!

Personally, I'd prefer to let the QB beat us with his arm (we've actually got decent CB's despite the negative press). A large part of this year's struggles stem from a young LB corps, many of whom are just now learning the position. A couple are converted DE's, RB's and safeties. The rest are either manbearfreak Shawn Crable, or guys that haven't seen the field. So combine bad defensive play calling with a bunch of n00bs at LB and you have our problemst his year.

OTT: Mike Hart is obviously a great back who gets a ton of carries. How pivotal will he be for Michigan to continue their domination ofPurdue, especially considering he ran for 206 yards and a touchdown as a freshman in 2004 against the Boilers?

MNB: Hart's basically been our entire offense. Stop him and we're screwed. It's that simple. Henne's been erratic all year. He's lobbing horrid interceptions into bad reads or double coverage, our premier receiver is in Carr's doghouse and the right side of our line is held together by duct tape and bubble gum. Hart is the key for both teams. I gotta believe that favors Michigan.

OTT: As a fan how shocking was the Appy State loss and how did it contribute to the Oregon loss the following week? Was USC's loss to Stanford last week more of a shock?

The ASU loss was crushing, don't get me wrong, but it's not a loss that should've happened. FG miscues, stupid penalties, receivers and defensive backs that left their legs in the locker room. There may have been a hangover against Oregon, but Michigan actuallyled 7-3. No Oregon was a butt whuppin' where ASU was a comedy oferrors.

Between ASU/UM and Stanford/USC, I'm not sure which is worse. I think the "spread" on the USC game was insane, 40+ on a conference opponent? Are you kidding me? Where Michigan was 5th with major issues and questions, USC was a consensus No.1 in the media and Coaches Poll. Stanford was 1-3 going into that game and hasn't had a winning season since Willingham was at the helm. So I guess, maybe that game was a little more shocking nationally. But the ASU game really knocked the wind out of me.

OTT: What is your perception of Purdue as a program, wannabe big shot or really good middle of the pack team?

MNB: Middle of the pack. There's always the chance Purdue will enter that upper tier in the conference, but it's going to take a significant commitment from the athletic department to do so. Until 80,000 crazies cram every game, I've gotta say middle of the pack.

OTT: Finally a prediction, how do you see Saturday's game playing out?

Thanks Dave! My answers to his questions will be available on Maize N' Brew later this week!