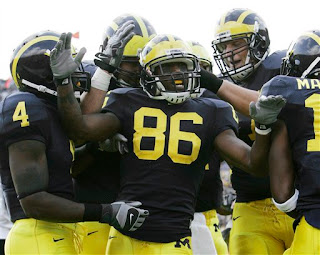 If I knew I had a chance at a refund I would contact the Purdue athletic department for my $110 back from two tickets for yesterday's game and $65 for the hotel stay Friday night. I have never seen a team more underprepared and more scared to play another team they could beat in my entire life. The Ohio State loss was embarrassing, but I was willing to write it off as simply a good team doing the job. There is, however, no excuse for not even being competitive yesterday, especially the way things started.

Let's look at the first couple of series. We played well and got a stop on our first defensive series then a fluke play leads to an early touchdown. Normally we would go in the tank at that point, but I'll give credit where credit is due. Though the offense wasn't moving the ball the defense kept fighting and got us the ball in scoring position. Since Michigan was vulnerable against a running quarterback we actually attacked that vulnerability and scored on a nice little running play. It is 7-7 now and we've evened things turnover-wise.

Even after a long drive we showed some promise by getting a stop for a field goal, and Hart wasn't running wild on us yet. Once the Sheets fumble occurred (and I still have no idea why Dierking got the start) the wheels absolutely came off. We had dropped passes. We had throws into triple coverage for interceptions when we only needed to run out the clock on the half. We had throws to receivers that weren't even there. We had our best running back banished to the bench because he fumbles again at a critical time (shades of Montrell Lowe at this point). We couldn't even intercept the ball right, as Dan Bick had a throw right into his chest for an easy goal line pick that he batted down instead of tried to catch, costing us three more points.

We were given a blueprint on how to beat Michigan by Appalachian State, Oregon, and even Eastern Michigan and Northwestern to some extent. You spread the field. You make the quarterback a threat to run the ball (which we seem to have forgotten Painter can be). You actually play up on receivers instead of giving a talent like Mario Manningham a 10 yard cushion every time (although why would we start doing this now?). Once again this trend has happened. WE have seen where teams are vulnerable and failed to adjust to exploit that vulnerability. We have once again started out hot, but never change our own style of play. Have we forgotten other teams have satellite capability, DVR's, and coaching staff to analyze our play? I think we have because by midseason everyone knows what we're going to run, but we refuse to change anything so they are ready for it. This goes right through to game time as we simply refuse to adjust anything when something is going wrong.

Manningham is running long fade routes, so maybe we might try jamming him at the line to throw off his timing like Michigan always does to our receivers. The spread option painter ran so well two years ago was right there so many times, so why not have him keep the ball and run once or twice? Cliff Avril, our best end, is getting manhandled by their first round left tackle. Why don't we switch him over and have him rush from the other side? It is simple things like this that we refuse to do and it is frustrating as hell! It's like we're trying to screw in a flat head screw with a Phillips head screwdriver and wondering why things aren't working when we have a flathead right there.

Being down 31-7 at the half was frustrating especially considering 21 of those points were gifts off of turnovers. The defense was worn out before they even had a chance to settle in and I felt they were doing at least a respectable job against Hart early on. By the time the second half came around though they were naturally gassed and had nothing left.

Being in the stands it almost seemed like we tightened up in the environment of the Big House, when I have been to much more intimidating stadiums crowd-wise. The Michigan fans around us were very friendly and the crowd never seemed as big as the announced attendance was. I have seen us play in much more intimidating and even louder environments at Ohio State, Minnesota, and even Hawaii, but at least we were competitive. Yesterday it was like we remembered we're not allowed to play well in Michigan Stadium and followed accordingly.

So where do we go from here? I am trying to get myself excited about the Outback bowl as our best shot, but having just gotten drilled by the two best teams in the conference when I know we should have at least made one of them a game it is hard to get excited. Yesterday proved that the Big Ten is wiiiiiiiiiiiiide open behind Michigan and Ohio State, as everyone except them and Illinois now have at least two losses in conference play. It is time to us to re-evaluate things and, more importantly, wake up the offense that has fallen asleep. Painter played like crap yesterday, and he needs to snap out of it.

We have an Iowa team at home we absolutely have to beat in order to stop the bleeding. They have a good defense, but they can't seem to score at all now, so we need to score early and put them away. We have a Northwestern team that is now probably going to be a fun shootout since they can't be stopped, but they can't seem to stop anyone. I know we have the ability to beat Penn State, but I have zero confidence it will happen after these last two weeks. Michigan State is a team I can't figure out, and Indiana is tough, but beatable in Bloomington. There is no reason whatsoever we cannot win four of these next five, giving us nine wins. Unfortunately at 9-3 we would be back to the old 9-0 against teams we should beat, but 0-3 against good teams. We have to win at least four of these next five, and we have to look drastically better against a Penn State team that is getting its groove back.

Whether this will actually happen though is a matter of debate. I