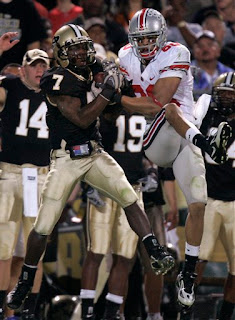 Well, we learned yesterday that Ohio State is a very, very good football team. When looking at the rankings this afternoon I think we were helped by the fact that almost every team around us also lost, plus we had the best loss of that group in losing to a top 3 team. It's a bit of a step forward for the program that Ohio State improved its standing in people's eyes by producing a dominating win over us. Naturally, we dropped a little, but there is at least a modicum of respect nationally in that we did not drop out of the coaches' poll and we barely dropped out of the AP poll. I find the polls are a funny thing, as the one the media puts the most stock in, the AP poll, is not even used to figure the BCS at all anymore. Right now we kept our ranking on a probationary measure, and it can easily be regained.

So now we are at a crossroads, as we head to Michigan with a temporary reprieve and a chance to begin the second half with a signature victory. Even a win at Michigan over a subpar Wolverine team would still be a very good win, especially since we haven't won there in 40 years. A win at Michigan would put us back in both polls, keep us right at the top of the Big Ten in case Ohio State slips badly, and keep us in line for a New Year's Day bowl.

Last night, however, was still a blow to the program, but it was not as harsh of a blow as originally thought. While part of the blame lies on us, many people seem to believe that Ohio State is just a really, really good football team. I tend to agree as they put on a clinic on how to win a night game on the road. First it helped that they always travel well and brought several thousand fans. The O-H-I-O cheer was embarrassing in the second half, and should never happen in any venue outside of one's home stadium. Second, they came out and immediately stopped us. I was encouraged that we at least moved the ball a bit, even on the ground, on the first drive, but we were still stopped. Third, they responded with a quick touchdown drive to go up 7-0. Fourth, they produced another stop. Fifth, they got yet another touchdown drive to put us down 14-0 very early.

Since we had not played from behind since the opener at Toledo I wasn't sure how we were going to respond. Meanwhile, Ohio State got in our heads by saying, "We're up 14-0 and we've already topped your good offense twice, what makes you think you're going to come back?" It was the worst possible beginning for us, and as a team that has not responded well to challenges in the past, it sucked the air right out of the stadium. The only chance we had in this game was to come out and play our style early and get a score to start. I was actually in favor of putting the defense on the field first to challenge them and get the crowd behind them early. A stop then would have given us some early momentum, but this was the first of a few big coaching errors on the night.

Now we're down 14-0, and we reverted to typical Purdue. We completely abandoned the running game instead of sticking with a game plan that might have still worked. We had had some success moving the ball on the ground. Sheets wasn't breaking off 20 yard runs but he had multiple 3-5 yard gains early. Once we started to break away from it though Ohio State figures us and knew exactly what we were going to do. They then simply sat back and waited for us to do it. They knew they could stop our running game with just the front seven, and even the front four in some instances. They knew they could pressure Painter and force some errant throws. They also knew that even if they gave up a few plays they could stop a drive before we got into serious scoring range.

Even when we did something right Ohio State never lost confidence. The three interceptions were great defensive plays, and I will give a ton of credit to the D for playing a pretty decent game after getting shocked early, but two of those interceptions came inside the five yard line. That's just like a great punt if you're Ohio State, and they had to be totally confident we weren't driving 97 yards against them.

We made our share of mistakes to help them out. A poor punt and a fumble on a kickoff gave Ohio State great field position and 10 points. Without those two mistakes it could have been a totally different game at the half. We also stuck with our typical play calling by expecting the same plays that had been stuffed before to work again. Where were our option runs? Where were any reverses or anything else to mix things up and provide a spark? The defense was actually a pleasant surprise, and I echo the sentiments of many in that I would have like our chances if you had told me we were only going to give up 23 points. I thought we could score more than that, but man that Buckeye defense was good and they completely took us off our gameplan.

Painter himself did not have a bad game, considering he often had someone in his jersey. Still, it's never a good thing when your quarterback has to throw 60 times a game. He did not have a pick though (a few were dropped), and he generally did well. The coaching mistakes were big, but they were not bigger than the fact that Ohio State was just better than us. We didn't execute a perfect game like we needed and the fact Ohio State is just a better team became an even more pronounced difference.

I know we can compete with teams like this, but we have to play a near perfect game to do so and for whatever reason we have been unable to do that in the past few years. Some of it is coaching, some of it is a talent game, and some of it is simply the way the ball bounces at times. Ohio State is a great team, and they deserve their top 3 ranking at the moment because they have yet to suffer any kind of a letdown like so many good teams have done this year. There's isn't a better team in the Big Ten right now, and I remain confident that if we can play to our ability we can still have a very good season. I am comfortable in saying that we just got beat by a better team, as they beat us in every phase.

So where are we now? Like 109 other teams in the country we have a loss, and there are some very, very good teams that are in the same boat as us. We got worked by one of the best teams in the country at home to the tune of 16 points, but USC, a team regarded as the most talented in the land, dropped a game also at home to a team that hasn't been relevant in years. We won't see a better team in our final six games, and each of those games is winnable. This can still be a good season and we can still gain some respect, but there can be no moping. We have to turn it around now.

It's time to focus on Michigan. I tip my hat to the Buckeyes and wish them the best on the season. They are now the conference's last hope for a national title, and I wish them luck. We have a chance next week to do something we haven't done in 40 years, and if we can get things back on track we can also prove that we are not the same old Purdue that will go into the tank after one loss. The Wolverines are susceptible to a spread offense, and if we are patient and play our style of ball we can finally do something positive in our Big House of horrors.

If Appalachian State can do it then so can we.