Share All sharing options for: Big Ten Week 9 in Review 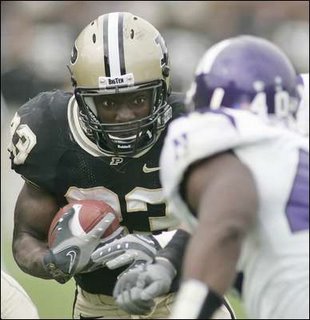 As promised, things look a lot more clear when it comes to the Big Ten bowl picture. Two more big games loom as to teams moving up and down quickly, and those are this week when Purdue travels to Penn State and next week when Indiana goes to Northwestern. Purdue can suddenly vault itself into a New Year's Day spot by beating the Nittany Lions, while Indiana desperately needs a win over the Wildcats to assure going to any bowl. This past week both did a lot to head in opposite directions, but neither will believed until they win those respective games remaining on the schedule.

Elsewhere this past week no one received more damage to its postseason chances than Michigan State, while Iowa made a statement of its own by outlasting the Spartans in double overtime. That win moves Iowa ahead of Michigan State should both teams become eligible, and Iowa can move ahead of another team if they can get past Northwestern this week. The Hawkeyes suddenly find themselves going from no potential bowl to being 7-5 and getting at least to Detroit. As a result they move up in a vastly shaken up version of the Power Rankings with the return of the predicted bowl for each team.

The Buckeyes stay on top but Wisconsin comes to the Horseshoe this week in what could be a difficult game. The Badgers are beginning to play their best football of the season with a back to back slate of Ohio State and Michigan back. Unfortunately without a completely healthy P.J. Hill Wisconsin doesn't have much of a shot of pulling the upset. Surviving a white-out with ease in Happy Valley will make this week seem like a cakewalk

So what else does Ohio State have to do to prove they are the number one team in the country? I certainly don't know. They have completely shut down three of the best offenses in the conference with Minnesota, Purdue, and Northwestern. They've won with ease in one of the most hostile venues in the league where the crowd did everything possible to will Penn State to a win. All they need to do is hold serve at home and we get a second straight Michigan-Ohio State game for everything. I'm not picking against them at home.

As expected Michigan dominated in the win over Minnesota and got some valuable rest for the banged up Mike Hart and Chad Henne. With the way Michigan State is struggling right now they may get even more rest this week when they go to face the Spartans. While all the attention is on the missing offensive stars and how the backups kept things rolling one should pay attention to how much the Wolverine defense has matured. They've done a very fine job the last three weeks in keeping Michigan in games.

I don't think Michigan can pull off the win against Ohio State though, much as the bottom of the conference wants them to. Michigan has the more difficult road to getting to the big game unscathed with a pair of road games the next two weeks, and I am not convinced they can get past Wisconsin without getting burned.

I would really like to see Wisconsin play Penn State and Illinois again right now, because their offensive performance the past two weeks would have been good enough to at least get them a split against the two. Their remaining schedule could sneak them into a BCS bowl if they win out and get some help, and being a second team from the conference in the BCS is possible if things really break right. It's not quite what the Badgers wanted, but it's something to play for.

Against Ohio State the offensive line has to continue to play at a high level and the offense as a whole must provide some balance. The defense cannot let Ohio State build a lead like it has in so many games either. I was rather impressed by the way that Wisconsin completely shut down Indiana after struggling so much earlier this year, and that gives them some promise for this week.

So here we are again with another "prove it" game on our schedule. Will the third time be the charm? It depends on how much Penn State has left in the tank after being dismantled like we were against Ohio State. At least we have something in common with the Nittany Lions before facing them, but will it be enough? Personally, I can't help but be pessimistic and think we'll actually get a big win on the road until it happens.

I'd like to say the noon kickoff helps, but in two night road games we have won easily while we struggled during the early kickoff at Michigan. Of course, Michigan is a much harder venue to play at than the Metrodome or Glass Bowl. Much like Wisconsin and their chances at Ohio State, we have to maintain offensive balance with the running game and not fall behind early. Penn State is a team I know we can beat, but it will take the most complete effort we have turned in all season. If we play as inspired as we have it times these past two weeks we will do well.

It wasn't a pretty win over Ball State, but it was a win and Illinois is bowl eligible for the first time since 2001 when it went to the Sugar Bowl. Now they get Minnesota in what may be an easier game to go after a seventh win. That win would assure them of a trip somewhere for the holidays, as well as at least a .500 conference record. Considering where this program has been of late Illini fans should be ecstatic.

Illinois is too one dimensional to be a threat on the road against Ohio State, but beating Minnesota and Northwestern are certainly possible. At 8-4 would they be picked ahead of us should we finish 9-3? They would likely have a couple of better wins than us, but the Iowa loss may come back to haunt them especially since we dominated the Hawkeyes a week later. I'd certainly like to see Illinois if it had a quarterback that could throw the ball.

This is where Penn State will find itself if they lose to Purdue this week, and at a neutral site I would pick us, but I am nervous about heading into Happy Valley. Despite the trouble Penn State has had this season no one is giving Purdue a chance this week, and that is the way I like it. The running game has been too inconsistent and we have a defense that is playing very well against the run since facing Michigan. Albert Young and Tyrell Sutton are better backs than Penn State has, and we stopped them.

I can't get past their defense though. Even though it gave up 37 points to Ohio State they are still pretty tough. If they get the crowd behind them with a few early stops against us it could turn in a hurry. Call me crazy though, but I really think we can win this game and even win it going away because of how much Penn State has struggled in their own big games this year. If the Penn State that demolished Wisconsin shows up we lose. If the Penn State that played Michigan shows up we win.

I debated quite a while on who to put in this spot, especially since it is beginning to look like a six win team could go here. All the teams above will likely lock up the first six Big Ten slots because they have or will have seven wins. Everyone else will be fighting for this coveted spot to ensure they will go somewhere, and Northwestern has the edge with the win over Michigan State and games remaining against Iowa and Indiana. If they split and get to six wins they will become the #8 team, meaning they are in if the Big Ten somehow gets two into the BCS.

I was impressed by the Wildcat defense in the middle quarters on Saturday as they took it to Purdue by forcing a ton of three and outs. The offense just didn't have enough of a running game to consistently move the ball and while the turnovers didn't lead to many Purdue points, they ended drives where Northwestern could have scored. They can beat both Indiana and Iowa, and both are at home.

Sometimes fate is cruel. Indiana finally has a season where it can get to a bowl game by starting 5-1, then a three game losing streak starts to bring a ton of doubt. The Penn State game was winnable if not for all the turnovers and the Hoosiers have to feel like they gave one away. The last two road games have been terrible efforts, and the trip to Northwestern is far from a layup. Even this week against Ball State is no guarantee, as the Cardinals have had a pair of close calls and could very well get their first win over a BCS conference opponent this week.

I put Indiana here ahead of Michigan State because I don't think Michigan State will win another game this year, making them ineligible. That means Indiana has the edge over Iowa in a tie, but if Iowa beats Northwestern this week the Hawkeyes will move into the #7 spot with easy games against Western Michigan and Minnesota remaining. We must beware the bucket game, because Indiana could be desperate by that point.

Saturday's game against Michigan State makes me feel a whole lot better about our run defense because we kept Iowa from doing what they did to us last year. Iowa did what it wanted to on the ground against the Spartans, and only Michigan State could allow a comeback to a team that hadn't even come close to 37 points all season, even against such powerhouses as Northern Illinois and Iowa State.

There's little question Iowa can beat Minnesota and Western Michigan to get to six wins, but the Northwestern game could be a play-in game for the Motor City Bowl. Who knew there would be such a fight over a trip to Detroit? Does this make Kirk Ferentz a genius for overcoming the injuries and suspensions that just made him such an idiot a few weeks ago?

I never want to hear about Purdue riding an easy non-conference schedule again, not after what Michigan State has done this season. Once again, the Spartans have started hot, only to gack away winnable games against Iowa and Northwestern. How in the heck did they go nuts against Indiana, then struggle to put away Iowa after how bad Indiana beat the Hawkeyes? Yeah the Spartans have the tiebreaker with the Hoosiers, but with games against Michigan, at Purdue, and Penn State left I don't think they'll get a sixth win to make it matter.

How can this happen? Mark Dantonio as the new head coach was supposed to change this, but Michigan State still can't beat the conference teams it should beat and as a result they will probably be home for the holidays. What a season to miss Minnesota too. The Spartan fans have to be shaking right now, telling themselves, "This is not happening…"

Minnesota needs to make it a goal just to win a game this year. They can ruin the seasons of Iowa and Illinois if they win one of those games, and it would be a big step forward for a program that really needs one right now. Unfortunately the offense has to play lights out for this to happen, and Illinois, Iowa, and Wisconsin have too good of defenses to allow that to happen.

At least the Gophers played Michigan closer than we did.