The ability to turn on the switch

Share All sharing options for: The ability to turn on the switch 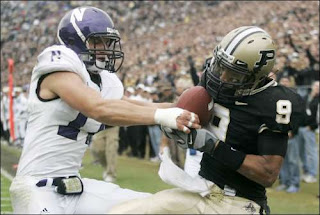 Through the Halloween party I attended last night and most of today I was trying to come to terms with the unusual events of yesterday. In our first win over a winning team this late in the season since 2004 I saw a vastly different Purdue football team than the one I am so used to seeing. It has long been a disturbing truth when it comes to Purdue football that once things start to go awry, we rarely pull things together. We seem to always progressively struggle more and more as the game goes along, unable to break out of a self-imposed funk until we lose a game that we probably had no business losing after the start.

Through three quarters yesterday this certainly seemed to be the case. Our defense was struggling to get off the field, allowing numerous third and long conversions as Northwestern went on three length-of-the field drives. We had banded together to stop the Wildcats one a first and goal from the three, but the offense had done little in two quarters to let us think we were going to overcome that deficit. A quick three and out followed that quieted the crowd and saw most of us nervous of falling behind by a pair of scores against an offense we had not stopped on consecutive drives and was beginning to wake up.

This is where things turned, as for the first time in eons it seemed, we turned on a switch and began to dominate. It didn't seem like much when we forced a punt on the final play of the third quarter, but with Neal Armstrong providing the most emotional opening to Shout we've seen the crowd actually seemed re-energized by the song. The offense itself went from dormant (five three and outs in the previous seven possessions) to what we expected. Until that point, Northwestern over-achieved on defense. We would then generate 140 yards on 18 plays to score a pair of quick touchdowns sandwiched around a Northwestern three and out quickly turned the game on its edge as we suddenly couldn't do anything wrong. We started catching passes we had been dropping. Holes started opening up in the running game. The defense became a brick wall, allowing just 24 yards and no first downs in the fourth quarter. We were playing so well on defense that even Chris Summers got in on a huge hit to end a kickoff return. You just don't ever come to Chris Summers' side of the field on a return.

It was a pleasant surprise, as we have never had the ability to just turn it on like that and blow a team's doors off in the fourth quarter of a close game. Most of the time if it is a three point game in the fourth quarter I am normally sitting nervously in my seat begging the clock to go faster. I've come to think that no good can come from those scenarios, but instead we won handily. There was no hanging on until the final minutes, and I must say that is a nice change.

Jaycen Taylor – Is he really just two weeks removed from being sidelined with a broken arm? Our offense is obviously better with him in the backfield and on the sideline. He even played a very smart game, falling down in bounds after his 50 yard run.171 yards from scrimmage and a pair of touchdowns clearly made him the player of the game. I've long been a fan of Kory Sheets, as I even have his jersey, but right now Taylor does more for us on and off the field than Sheets. The important thing is that these two are doing it as a team. Against Iowa they were almost even, while Saturday was Jaycen's day. Later on it will be Kory's turn while Jaycen will fill in a support role. We need the both of them to continue producing to have a chance at Penn State. Even though Sheets didn't fill the stat sheet yesterday one play in particular stood out when he held on to the ball and kept pushing for yardage while being gang-tackled. I've said it before and I will say it again: we are very tough to beat when we rush for 100 yards as a team. When we get to 200, like yesterday it becomes almost impossible for us to lose.

Terrell Vinson – Just another two pick game for Terrell, who very nearly ended up with a third interception later on. His first pick ended a promising Northwestern drive before they could get an early lead, while the second and subsequent return set up our second touchdown. It's been awhile since we've had a corner that is such a danger to pick the ball off, but Vinson is clearly stepping into that role. He actually leads the Big Ten now with five picks on the year.

Ciff Avril – A pair of sacks, a forced fumble, and a couple of hurries are exactly what we expect from the big guy. Keep it up Cliff, you're opening things up for a defensive line that is finally beginning to get some penetration.

The Defense as a whole – 297 yards. Northwestern had been putting up some monster numbers of both points and yards of late. In his last two big Ten games C.J. Bacher had thrown for just under a thousand yards against Minnesota and Michigan State. Yesterday afternoon we held him to just 208 yards, sacked him five times, and picked him off three times. Tyrell Sutton gained 72 yards in his first full game back, but Sutton is one of the best running backs in the league when healthy. We once again held a team under 100 yards rushing, which when paired with our offensive goal of 100 yards on the ground make it all that much easier to win.

I've been very impressed by the play of our defense during this two game homestand. Iowa proved yesterday against a Michigan State team that is supposed to have a better defense than us that they can move the ball and score points. Dropping 31 on the Spartans shows that our defense did a little more than just stop a punchless Hawkeye team. Now we held Northwestern to just 17 points and under 300 total yards. They struggled on a couple of drives, but ended drives with turnovers in the first half and by more conventional means in the second. I feel pretty content to hold teams under 20 points the rest of the way and let the offense do its job. Just remember, they didn't perform that badly against Ohio State, holding them to 23.

Dorien Bryant – He can be endlessly frustrating at times, but man oh man can he make the occasional great play. That touchdown catch to seal the deal was one of the best catches I have ever seen at Ross-Ade Stadium and he actually managed to get both feet down in bounds. Just a sensational play.

Dustin Keller – He didn't have a great day, but he was in the right place at the right time with the fumble recovery in the end zone.

Coaching – Did we actually show some gumption and go for it on 4th down inside the one not once, but twice? Did we start running reverses and mix up the playbook when we had been stagnant? Did we continue to commit to the running game even after falling behind? Who has kidnapped our coaches and replaced them with ballsy ones?

The second and third quarter offense – Wow, that was epically bad. Northwestern has been unable to stop anyone and after our second touchdown we made them look like the 1985 Chicago Bears. Not only were we not moving the ball, we were going backwards by committing penalty after penalty. At least we held on the ball and didn't turn it over.

The officiating – Good lord was there some bad officiating yesterday. These guys consistently were mis-spotting the ball, would flag some plays but not others, and didn't seem to realize that when you land with the ball on the goal line it is a touchdown, and you're allowed to say so after a review.

A missed field goal – It didn't end up costing us the game, but Summers just missed his first field goal since the Toledo game (I don't count the block against Minnesota). You're going to have a miss every now and then and he just barely pushed it to the left, denying the fans at the north end of the stadium to actually see a score on the day (Not that I mind in section 128 on the south end). It's not a big deal, but hopefully it won't effect him mentally and he can get back on track. After that hit he had on Roberson in the fourth quarter I certainly don't want to mess with him. He's becoming the Chuck Norris of our kick return team.

Penn State suddenly becomes a very big game for us because it likely means the difference between a New Year's Day bowl and not playing in one. If we can beat the Nittany Lions and hold serve against a fading Michigan State and Indiana I have a hard time seeing us being held out of a New Year's Day bowl at 10-2. We would also finally have a "good win" that people were not expecting from us. A loss could still mean a 9-3 finish, but they would all be expected wins and because of no head-turners we could end up be relegated to sixth bowl-wise. We won't pass Ohio State or Michigan. Penn State would likely finish 9-3 if they beat us and go ahead of us. Wisconsin would probably be selected ahead of us, as would Illinois if they finish with 8 wins. There's still a lot of football to be played, and Wisconsin is a bit of a wild card since they are playing well and still play Ohio State and Michigan, but Penn State is our last chance to truly control our bowl destiny.

The thing is I know we can beat them. It will take our best effort of the season and we can't afford the lapses that plagued us against Michigan and Ohio State, but if we can at least stay with them we have a chance. I want to at least be competitive in this game, but I am encouraged by the way our guys have recovered the past two weeks. They want a 10 win season, and beating Penn State suddenly makes that a very real possibility, as well as a top 20 finish nationally.

We have to continue running the ball as well as we have the past two weeks. We've seen that early struggles on the ground can give way to later success if we stick with it. We have to keep playing defense, especially since the Penn State offense isn't that great. This week we did something we haven't done in a long time by quickly reversing our own fortune. Let's continue that surprising trend by going out and winning a game we're not supposed to. Who knows, we might even gain a little respect along the way.