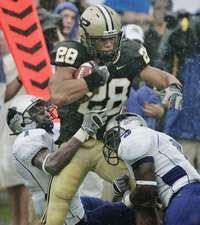 Only Miami losing kept yesterday from being the second consecutive perfect week football-wise. Even my old high school team won on Friday night for their third win of the season, and may actually have a winning season this year. Yes, with Purdue winning, our long national nightmare of Michigan and Notre Dame losing, and the first start of God's gift to football it was a good Saturday.

My optimism about the Boilermakers is guarded though because while we have performed very well offensively and even defensively, we still haven't done it against good competition. We do look much better than last year though, and that is pleasing. Last year we struggled to stop even bad teams, but Saturday we were completely dominant all game long. It was the first time we have not given up a touchdown in a game since beating Illinois near the end of the 2005 season. 236 total yards surrendered is also our best effort in a very long time, even if it was against a 1-AA team. Remember, last year we played one of the worst 1-AA teams in the country and we still gave up more than 380 and 35 points. Still, what all can we take from the team so far.

We can certainly score against some bad defenses. I am pleased that even our second string guys have put together a couple of scoring drives the last two games. Dan Dierking is even looking like a candidate for more playing time, but again, it was against subpar competition. The good news is that we may be able to keep this pace up over the next three weeks. Central Michigan has already given up 52 points to Kansas of all people, and gave up 31 to the same Toledo team we beat a week ago. Minnesota gave up a bunch of points to Miami (OH) yesterday and barely escaped with a win. Then there is Notre Dame, who is playing better on defense, but still needs to find an offense to go with it. Things are lining up quite nicely for our offense to be on roll before facing the first difficult defense of the season when Ohio State comes calling.

I am bothered that we weren't able to run the ball as well as we did against Toledo, but when the passing game was working as well as it did I guess there is no reason to run as much. On the first drive Jaycen Taylor seemed to be about one block or cut away from breaking a run for a touchdown, but as the game went on we fell back into our tendency to pass more and forget about the running game. 186 total yards is nice, but much of that came late in the game when we were trying to run out the clock. The only other complaint is that we weren't able to punch the ball in with two tries from the one early in the fourth quarter.

Speaking of that particular drive, it was very pleasing to see the coaching staff show a little gumption and go for it on fourth down twice. Both times we made it, once running and once passing. I know it had little effect on the final outcome of the game, but it was good to have from a confidence and attitude standpoint.

It seems like our offense as a whole is gaining a ton of confidence and a bit of an attitude, and that is a wonderful thing to see. The receivers did a good job of blocking down field yesterday and opening things up for gains that we would not have had last season. Jake Standeford has always been a good blocker and one of those guys that's willing to do anything asked of him on the field, but his block to free Keller down the sideline is going to jumpstart things even more. That was simply a smart play made by a guy in the right place at the right time, and it is a sign this team is getting an edge. With three more opponents we should be able to move the ball well against that is key before getting into the meat of our schedule.

Finally there is Curtis Painter. Yesterday he played very well and I noticed him calmly going through his progressions. Credit also should be given to the offensive line as he had plenty of time to throw. He has barely had to run the ball yet and it is good to know that that option is still there in hiding if we need it. There was still one play that we were lucky wasn't an interception, but fortunately the ball bounced off an EIU linebacker and Bryant was there to catch it.

So far our two opponents have served their purpose and things have gone exactly as planned. We have been able to fine tune things while winning comfortably. That's all you can ask at this point offensively.

You can't truly judge this group yet, but comparing it to the similar competition from last year they are night and day better. Their one serious offensive threat in Micah Rucker gained some yards, but didn't gash us like so many other have. We also only gave up only 83 yards rushing. That number is amazing and I don't care who it was against, I'll take it. We only managed one sack and no turnovers, but all around our effort was much better than anything turned in last year. Justin Scott alos very nearly collected another interception, and seems to be growing into a ballhawk type of safety much like Stu was when he was at Purdue.

The most important thing I noticed was how our blitzing, while not resulting in many sacks, still forced several errant throws that bounced to the turf. Many of these came on third down. This kept our defense from being on the field too long and kept the numbers down, but that is what we want. The more we can have our offense on the field, the better.

The defense also stiffened in the red zone and forced just a couple of field goal attempts. Even when they could have slacked off with a big lead and the lightning delay they stayed out there and played hard. I don't have much else to say because of who we played, but the defense was a major positive on Saturday for the second week in a row. Thus far they have only given up three real scoring drives, as three of the drive Toledo had were a result of a short field. They'll get a good test this week as Central Michigan is a team that can move the ball very well, but if the defense comes to play and can hold them to even 25 points we should have no problems.

I only have a few nits to pick here, as our kickoff coverage slacked off and gave up some good returns. This is the same return team that recovered a big fumble in its first effort because of a finely placed kickoff from Summers and a heads up play by Byron Williams. It's going to take some time to get used to the new kickoff rules, and we haven't even faced a good returner yet.

Our own return game was rather lackluster, but EIU kicked away from Bryant as much as they could. Taylor was on the verge of breaking the opening kickoff, but came up just short. We had a couple of good punt returns too, showing that this area will now be a dangerous threat.

We also made a field goal and are now 2 for 3 in that department. Seeing Summers' only attempt split the uprights right down the middle was a welcome sight. That kick would have been good in the arena league it was so perfect. He's hit two in a row now and has to have regained some confidence. Hopefully he can keep this up and we'll have one less thing to worry about.

I am feeling pretty good, but I am anxious to see how we will perform against a good team. Having Central Michigan next is nice because they will be our best opponent so far, and may be the best team we face before Ohio State. We've done a very good job of spreading the ball around and that needs to continue. It's nice to see that our biggest problems right now are off the field issues instead of on the field issues. That's the only real beef I have at the moment, as we are developing a police blotter that would make Florida State and Maurice Clarett proud.

I am glad the Chippewas are coming to town next, as I am tired of the cream puffs on our schedule. It's time for a real test before we get into the conference season, and things couldn't be any better to begin the conference season than a visit to Minnesota where they are struggling to beat MAC teams while we're blowing them out.