Exactly what we needed

Share All sharing options for: Exactly what we needed 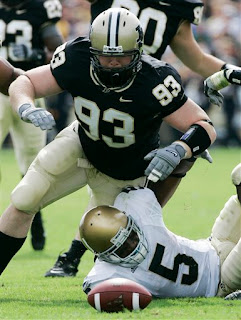 Today was an interesting game, as once again we built a big lead and had a tendency to put things on cruise control for a portion of the afternoon. I do think things were a little different than the past two weeks in that it wasn't entirely our fault that things got close. There were also plenty of positives that we can take out of the day and file away for the future. As I watch Ohio State refuse to be blinded by Minnesota's uniforms it is now safe to start thinking ahead to the Buckeyes and the biggest game for the program since the infamous Fumble Game. I think that we can actually take a lot away from what happened today, and it is exactly what we needed before facing the Buckeyes in a week.

First things first, we have to be encouraged that we played probably our worst game of the season and still won by 14 points. Granted, I was concerned when the Irish cut the lead to 26-19 and had a chance to get the ball back with plenty of time. I knew (and Coach Weis later confirmed this) that if we gave them the ball back and they scored, they were going to go for two. I wasn't entirely convinced we would have been able to stop them in such a situation and the ensuing loss would have been one of the most devastating in program history. We could not afford to lose this game today because of the damage it would have done to our collective psyche. This is the worst Notre Dame in recent memory, and we simply could not afford to lose to them. The fact we were able to come out with our C-level game and win is a very good sign.

Even in that situation, where the Irish had cut the lead to seven and had all the momentum, the offense finally woke up with a clutch drive to seize control once again. I am really liking the offense's ability to do that even when they are struggling, as it has been our M.O. of the past three weeks. We were finally challenged late in this one, and we responded with a critical touchdown drive and a game clinching interception. Despite everything that happened this showed the heart of our team, as teams from the past few years would have caved, not put together that drive, and given the ball back to Notre Dame with a chance to win.

Secondly, I cannot say enough about Chris Summers today; as he was the sole reason we were ahead comfortably for most of the afternoon. After getting so much negative press in the offseason, (even today I heard someone mutter that he was going to miss his second kick) it is good to see him come through with four huge field goals today. Think back to last season, could we have counted on him to hit even two of those? How different is the game if he misses two like he might have last year? On a day when the offense was struggling mightily (and I will give credit to Notre Dame in a second), Summers made sure that two turnovers were paid for in points and that we had all the drives he was called on to end didn't end with nothing.

Terrell Vinson needs to be given credit today as well, with two interceptions and the first dual pick performance since a certain Mr. Schweigert was patrolling the secondary. His first set up a critical field goal, and his second clinched the game as he made a good play on a ball in the air in the end zone. I am really liking his development as a cornerback, and he had the best day of anyone on the defense. The defense as a whole did a great job against the run, allowing very little on the ground until Notre Dame went away from it totally by being forced to pass late. As long as the run defense continues to play that well and allow the offense to build 20 point leads we will be fine.

Finally, I want to give credit to Notre Dame as a whole. I must say that I was impressed by the Irish today, as they simply refused to give up even after being thoroughly dominated in the first half. I am a virulent hater of the Irish, but I was impressed today by their play. Golden Tate has three very nice catches that accounted for nearly a quarter of their yards and a score, including the final Irish touchdown in which he was the one person that had a chance to catch a ball that was pretty much hurled blindly in his direction and he came down with it. As a whole Notre Dame had a winning mentality by not only going for it on fourth down six times but converted four of them. They and nothing to lose each time and on four of them they simply made plays. Two of the three Irish touchdowns came against serious coverage and it was a case of the receiver making a better play.

Notre Dame went with its hurry-up offense in the second half and moved the ball against a tired defense. They also simply started throwing the ball all over the field and received solid protection for the first time all season. This is becoming a glaring weakness for us, as we were unable to be in both Clausen and Sharpley's face all day despite the fact Notre Dame had been surrendering more sacks than a grocery store bagger before today. At first they picked us apart with the short dump-off passes, and then they were able to get some throws deep and allow the receiver's to make big plays. That's probably where about half of the passing yards we gave up came from, but it took until the fourth quarter to get it going to the point that it produced consistent results.

Notre Dame's defense also played better than expected by frustrating us into four field goals on drives that probably should have ended in touchdowns. We had a ton of broken up passes, hurried throws, and dropped passes that need to be corrected before we can seriously think about beating someone like Ohio State. Notre Dame got in Painter's face more than the other four teams we've played combined. Both of Painter's interceptions were the result of bad throws partially credited to the pressure he was facing. It was the worst game our offense has played all year, and really we should credit part of the scoring to the defense thanks to the three turnovers it caused. Notre dame prevented the two turnovers deep in its own territory from being converted into touchdowns, and therefore I tip my hat to the Irish. They will get better, and today showed that we must also get better if we're going to compete with them in the future.

So why did we need this game? It is the first time we have seriously had a game on the line in the fourth quarter and we responded well. I am concentrating more on that than the fact that we played really badly today on offense. As bad as things went today, there is a lot we can take away from it and build on if we choose to. It can't be ignored that Notre Dame made a TON of mistakes today in order to sustain its misery. The late hit on Painter as he was running out of bounds 10 yards short of a first down, two missed extra points, and a blocked field goal are all examples. The Irish must become a much more disciplined team if they expect to compete in the future.

Overall I would rate today as a C effort at best, and that is what is most encouraging. We played a far from perfect game and still won quite easily. Next week will require an A effort, but for now let's enjoy being 5-0 for just the second time since 1945. It also helps to have the Shillelagh back in the trophy case for another year. Now we need to look forward to the Buckeyes, and even though they won 30-7 tonight I think we have a shot. It's our first chance to make a national statement in three years, and we need to take advantage.