A Travesty in South Florida

Share All sharing options for: A Travesty in South Florida 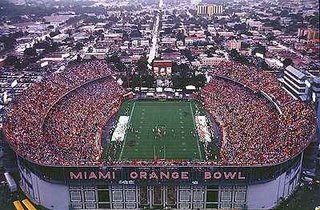 Greed apparently is more important than tradition, and that is sad. The news from South Florida today is grim as the Miami Hurricanes are leaving the historic Orange Bowl for the greener pastures of Dolphin Stadium to the north. The price is a mere $1.5 million more annually to the University of Miami.

Who knew that sacrificing one's most dearly held traditions carried such a low, low price.

I have never seen a game at the Orange Bowl, but I do hold on my refrigerator tickets to the November 3rd Homecoming game against North Carolina State. That will now likely be the second to last game in the history of the stadium that dates back to 1937. The Hurricanes are the Orange Bowl, and the Orange Bowl is the Hurricanes. What happens now is a loss of identity, home field advantage, and a place that Canes fans can truly call their own. Dolphin Stadium was not the home of the longest home winning streak in college football history, as that honor belong to the 58 straight wins by the Canes in the Orange Bowl. It is also not the home of five national championships. The most championships won at Dolphin Stadium, two, belong to a team that is getting kicked out because the owners refuse to share, but now they want o share with someone else. Ironically the Marlins may benefit from this the most, as suddenly there is land for the long sought after Marlins Stadium in Miami.

Recently our own Ross-Ade Stadium, which is older than the Orange Bowl by the way, underwent a series of major renovations entirely paid for by Purdue University. It went from an aging facility to a fine Big Ten venue in less than three years. The Hurricanes, with a much stronger history than our own Boilermakers, didn't expect to offer a single dime in either renovating the Orange Bowl or moving to Dolphin Stadium. They instead waited to see who would offer the most for them. They do not realize the home-field advantage that could have been saved if they had only cooperated and (gasp) even helped the city renovate a place that certainly needed some work, but could have been saved. Apparently though Miami would rather invest in its basketball team with a new arena on campus than the football team that has put it on the map.

I will agree that business-wise the decision makes sense. Miami gets more money to play in a better facility than they currently play in. Sometimes decisions need to be made with more than business in mind. Did they consider the fact that Dolphin Stadium has absolutely zero public transportation linking it until 2014 when the Metrorail finally gets there, while the Orange Bowl does? How about the fact that it is significantly further from the Coral Gables campus? In the best of traffic it takes an hour to get across Miami from Coral Gables to Dolphin Stadium.

Let's remember one of the most recent times a team abandoned a stadium steeped in tradition to move into a professional venue. It happened in the early 80's when Minnesota moved from the on campus Memorial Stadium to the Metrodome, where they became the third child in line in their home stadium. It is a decision that many fans regret making, so much so the Gophers are in the process of moving back to campus after less than 30 years in their "new state of the art venue." Is there where Miami will be in 25 years, with even less room on campus to build a stadium? Remember, the Gophers had one a few National titles in their old building too. Now they had to fight for years to raise money for a new stadium.

How about the field itself? Right now the Canes are the sole tenant and have tons of flexibility when it comes to scheduling their games. How often will they get marquee Saturday night home games when the Dolphins will play just 12 hours later on Sunday afternoon? What if the Marlins, who are there through 2010, make the playoffs again, moving the Canes to Friday nights? How will the field itself hold up to that kind of abuse? They say Dolphin Stadium is a "State of the art" NFL Stadium. I'll give you the new video boards are nice, but unless the ongoing renovations start replacing the seats they are some of the most uncomfortable seats I have ever sat in. It's a nice place to watch a game, but it's far from being one of the best in the NFL.

And really, what do all these amenities get you? Whatever happened to the game on the field being enough for the crowd? Why is it we need flashy video boards and graphics to accompany every play, pandering to our shortened attention spans? Even though I think all of that crap is stupid and unnecessary, it easily still could have been added to the Orange Bowl.

Here in Indiana we know a little something about tradition and our deeply help sporting venues. Go to a basketball game at new Castle's Crisler Fieldhouse or the Anderson Wigwam and ask them how they feel about their aging facilities. My high school plays its games in a 60-year old gym that used to seat more than 7,000 fans and was one of the largest high school gyms in the country. It is still generally regarded as one of the finest gyms to play in despite its age. Now imagine if the High school administration, or any of the administrations with these gyms decided to say, "You know what, we're going to forget this grand place we have that's full of so much history and go play our games at Purdue/Ball State/Butler/Indiana because it's a bigger place and has better amenities." I doubt that school board would be re-elected that November. That is what this is like right now.

I love Indiana High School Basketball more than most anything else on this earth, and it would be a tragedy if they tore my gym down. Right now I feel the pain my wife is feeling because I can relate. She is losing the Orange Bowl, something that she as an undergrad at UM treasured despite its faults. Her thoughts are reflected here. To her it is more than a building that needs some work; it is a home of sorts, just like my gym. She's not the only one as the vast majority of Miami fans are against this move.

Sure, the place needs a little work done, but it is work that could have easily been done. I am not surprised it wasn't done though, considering who is in charge of the University of Miami; one Donna Shalala.

Let me share a personal story that shows that this woman is not the progressive, sympathetic figure that this morning announced, ''This is a painful and sad decision. We all love the Orange Bowl, its history and tradition.''
For all that she cares about the Orange Bowl; she obviously does not care about Miami fans. One year we were on our annual Miami trip and attending a baseball game on campus. Shalala came by and nearly shoved me down the steps because I happened to be in her way. She is incredibly rude and does not care a single iota what the fans think. She cares only about her own interests, and will now be vilified as the woman who killed one of the most venerable college football stadiums in the country.

The Hurricanes may be on their way back with a great new head coach and a recruiting upswing on the way, but today they lost part of their soul. All of this was for the price of a few luxury boxes and a devil's agreement with the Miami Dolphins.

I hope it was worth it.