Share All sharing options for: Know thy Opponent 2007: Northwestern Wildcats 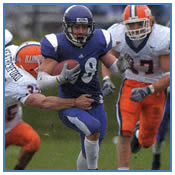 Our next opponent is one that could be marketed by the term "rollercoaster success". When the Wildcats are good, they run off a pretty good string of victories and qualify for a fairly high bowl as they did in 1995, 1996, and 2000 by sharing the Big Ten crown each time. When the Wildcats are bad, they are pretty dismal and usually get pushed around by the rest of the league. As one of our protected opponents we see the Wildcats every year in the same manner that we see Indiana each year. This year will be the 75th time we have played Northwestern, and, shock of shocks, it will be our homecoming game.

I think a large portion of the Rosetta stone is dedicated to the explanation of Northwestern being our homecoming game, as they have been our opponent for homecoming more than any other school. Every two years it seems like the Wildcats are our opponent on that day. It probably goes back to the days when they were the only team in the Big Ten we could beat with any regularity, so the administration decided to make them our opponent in order to give our returning fans a rare victory.

Those days are long gone though, and if we're not careful we could get bitten by the Wildcats again like we have two of the past three years.

Last Season for the Wildcats:

You can't discuss last year's Northwestern team without touching on the Randy Walker issue. They were only 4-8, but I think they were a dangerous 4-8 in that they were only a few played from being 6-6 and getting into a bowl, which would have been a minor miracle considering the circumstances. Northwestern was plagued by quarterback issues, injuries, and a defense that struggled to close out opponents. Still, this was a much, much better team at the end of the season than it was at the end of the season, and that is mostly because the quarterback issue was finally settled.

Early on Northwestern was understandably a mess. A win over a bad Miami (OH) team was followed by a 17 point home loss to 1-AA New Hampshire. Though New Hampshire was one of the best 1-AA teams in the country last year, it was still embarrassing. A win over a punchless eastern Michigan squad was the last victory before a six-game losing streak that saw winnable games against Nevada, and certainly Michigan State go by. For the sake of my colleague at Lake the Posts I won't go into the Michigan State game. Northwestern did finish on a strong note by shocking Iowa in Iowa City and winning a rivalry game against Illinois to end the year. Considering New Hampshire, Michigan State, and Nevada could easily have been wins had Northwestern played as well as it did at the end of the year this team was very close to being 7-5.

This year the Wildcats have every excuse to be thinking bowl game, as the non-conference schedule is charmin-soft. Northeaster, Nevada, Duke, and Eastern Michigan should all be wins, meaning Northwestern would only have to scrounge together two conference victories to get to six. With their spread offense that's always a little more quirky than ours that shouldn't be a problem, as Michigan State and Illinois are prime targets for those conference victories, but both are on the road. The November 10th game in Evanston against Indiana could mean the winner goes to a bowl, while the loser stays home for the holidays.

The Wildcats usually know how to move the ball and move it well. In seasons that they have had success it has been because of the offense moving the ball and scoring in bunches. C.J. Bacher settled into the quarterback role nicely late last season. He missed the first half of the season with a broken leg, but showed some promise in the spread offense late in the year. Northwestern's offense is about throwing the ball around, having a solid tailback to mix it up, and having a mobile quarterback for good measure. When it works it keeps defenses guessing, and that is what the Wildcats want to do this season. Mike Kafka played quite a bit at QB last year and is a better runner than Bacher, but not a better passer.

The main player in the offense will be running back Tyrell Sutton. Sutton ran for exactly 1,000 yards last year and ran for 1,474 as a freshman in 2005. He's also quite accomplished at catching passes out of the backfield with 84 career grabs for 657 more yards. Last year was disappointing for him but he looks to be more of the focal point of the offense this year. Mark Woodsum will likely play in what Northwestern calls a "superback" role, which is kind of a tight end/fullback hybrid. Still though, the running game will be dominated by Sutton and whoever is at quarterback.

In Northwestern's spread offense there usually isn't one star guy, but several capable pass catchers. This year's squad looks to be no different as there are several talented options for Bacher to throw to. Ross Lane, Rasheed Ward, and Andrew Brewer appear to have settled into the top three receiving roles, while senior Kim Thompson will look to contribute after an injury-filled season last year. Overall there is a lot of versatility to this group as there is a good mix of size, speed, and hands. Brewer also played a little at quarterback last year, meaning there is an element on the field for some trick plays we'll need to watch out for.

The offensive line is good and experienced, but there isn't a ton of proven depth. Trevor Rees, Dylan Thiry, Adam Crum, and Joel Belding all return after being starters last year and only the right tackle position will feature someone new. The best compliment I can say about Northwestern's line is that it gets the job done and won't be a liability, which is all you can ask for from an offensive line.

They haven't been great the last couple of years, but this is an experienced group that needs to turn a corner if Northwestern is to have success this year. This season the Wildcat defense should be good enough to perform well against the bad, but they may struggle against the good. Fortunately for us we should be very good on offense.

Up front the Wildcats have a big front four led by Cory Wootton. As a defensive end this guy is 6'7" and weighs 275 pounds, proving he is a load for any tackle to handle. He had 4.5 sacks and nine tackles for loss last year and even managed a couple of interceptions for good measure. John Gill and Adam Hahn should be solid tackles in the middle, while the other end spot will rotate between Mark Koehn and Kevin Mims. All the guys average 280 pounds and are expected to have a big year getting into the backfield.

The line backers are also big, led by Adam Kadela in the middle. Kadela is being hyped as an all-Big Ten type of guy, and if he stays healthy should have a very good year. It also helps for all the linebackers that their head coach was one of the best linebackers in school history, and he didn't exactly play all that long ago. The rest of the unit is fairly deep with good size, but not a ton of speed. Once again, our speed will be an advantage here we need to exploit. If our line can keep them from getting in the backfield Painter should have plenty of time to pick them apart.

Finally in the secondary where Reggie McPherson and Brandon Smith will be a solid duo at both safety positions. Still, the unit only had eight interceptions all of last year and will need more this year. Surprisingly much of the damage against Northwestern came on the ground last year, as only Troy Smith threw for more than two TD's against them. It's not a great unit, but it is far terrible.

Overall the defense looks like a unit that could surprise and give some teams trouble. It may not be able to completely stop the best offenses it will face, and is certainly not the Steel Curtain, but the Northwestern defense could prove to be very frustrating. If the offense is clicking Northwestern could shock a few teams. Remember, the head coach has a defensive mentality and was the star of a team that came out of nowhere to win the Big Ten in 1995. He was a leader then and will be now.

Northwestern needs to break in an entirely new kicker as Stefan Demos and Arnado Villarreal will compete for the job. Demos is also competing with Kyle Daley for the punting job, and probably has the biggest leg. The returners last year didn't do a whole lot so look for Northwestern to mix things up here to try and provide a spark.

I think Northwestern, even though they have had some very good years lately, still doesn't get much respect because the program was dormant for so long before 1995. Every time they sneak up on someone and beat them the team is left with a look of, "How the hell did we just lose to Northwestern?" The Wildcats have gotten very good at biting teams that are looking ahead, and this year should be no different. Trust me on this: they will beat someone this year in a total shocker of a game, as they seem to do it every year. I think much of it comes from that fact many teams look at their schedule and still see Northwestern as a win. Even fans don't get as excited when the Wildcats come to town as much as when Ohio State, Michigan, etc. visit. Northwestern has learned to play that to their advantage.

It will also help that the simple passage of time has somewhat eased the loss of coach Walker, who was one of the class guys of the Big Ten. This is more Fitzgerald's team now, and I can see he is shaping up the defense to what he wants it to by, while not tinkering much with an offense that has worked well in the past.

This feels like one of our trap games. It feels like it could be the game that everyone has down as a win going into the season, but we somehow lose it. It doesn't help matters that two out of the last three years have been under the same circumstances, and we lost those two times. Still, this is our Homecoming, and we usually play fairly well at homecoming under Tiller.

I can see our offense getting frustrated with a defense that is better than many will think it will be. I can also see our defense having trouble against a unit that mixes it up well and has a solid running back. This one could be more difficult than many expect.

I still like us with our offense playing at home. Northwestern is a good team, better than a lot of people are giving them credit for, but they still aren't the best team we will face all year. This could be a nice breather for us, or a dogfight. Purdue 34, Northwestern 24.