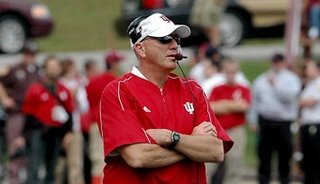 I briefly wanted to revive the blog from its summer slumber to do a quick post on the unfortunate passing of Indiana football coach Terry Hoeppner. If you read many of the Purdue boards since his hiring in Bloomington, he was often a caricature figure mocked for his excitement and constant rah-rah attitude. Many Purdue fans thought he was a joke for talking about getting IU into a Rose Bowl, for scheduling weak opponents, and various other reasons. To many he was a comic figure and the next in a long line of coaches at our rivals to the south that would come in talking big, but ultimately leave without a bowl appearance because he was coaching in a hopeless situation.

I, for one, was not in this camp. I was scared to death the day IU hired him, simply because his final Miami (OH) team was a top 10 team coming out of the MAC, and IU was a place he actually WANTED to coach at. Here was a guy that probably could have gotten any high profile job he wanted at the time, and he chose IU? Not only did he choose Indiana, but he had the audacity to talk about taking the Hoosiers to Pasadena in his opening press conference. These are the same Hoosiers that haven’t been to Pasadena since 1968, and have been bowling anywhere since 1994. In those 13 years every other school in the conference has been bowling at least three times, IU’s main rivals went from being worse than the Hoosiers to at least being a perennial post-season participant, and eight of the other ten schools have been to at least one BCS bowl.
His record may not say much, but Coach Hep made Indiana a better football team. If not for an unfortunate setback early last season, IU easily would have been in a bowl game as I would place good money on Indiana beating Southern Illinois and Connecticut to get that 6th win. The Hoosiers were not and still aren’t a serious threat to win the Big Ten title, but the fact they were even a serious threat as recently as last year to go to any bowl game prove that he was doing something right.

It wasn’t just seen on the field, but off of it as well. Look at the Indiana fan base for a moment. For the first time in years they had hope for the football team. Just in looking at Ebay and StubHub for tickets to this year’s upcoming Bucket game in Bloomington I can see that the days of going down the day of the game and grabbing a pair of 40 yard line seats for $20 like I did in 2003 and 2005 are over. Tickets are now selling for upwards of $90 apiece, and we could have our first sellout in Bloomington for the bucket game in years.

On the recruiting scene the mere fact that Jeremy Finch of Warren Central, a five-star recruit that eventually signed with Florida, had a drama up until signing day between the Hoosiers and the Gators shows that he was working miracles on the recruiting swing. Coach Hep was beginning to take an advantage in state that Purdue was on a downslide while IU was on an upswing. In a state like Indiana where Basketball will always be more important than football to most high schoolers, and where only a handful of schools like Warren Central, Ben Davis, Carmel, etc. are good enough to Produce Division 1-A football players on a regular basis it is important to be on top in the state recruiting wise. Between the two large institutions (Notre Dame has always recruited nationwide, so I don’t count them) Purdue had been on top since Tiller started winning ball games. The pendulum was beginning to swing the other way and that was a bad sign for Purdue. There simply isn’t enough talent in this state for both IU and Purdue to be high caliber teams at the same time, and neither school has enough pull nationally (although Purdue’s is slightly greater at the moment) to make up the difference. We have to remember, Purdue wasn’t even in the discussion over Finch, and Florida, the freaking defending national champs, had to battle IU for this kid.

It is ironic that the day of Hep’s passing is the same day Indiana will be breaking ground on the expansion of Memorial Stadium. 12 years ago, before Tiller game to Purdue it would have been considered laughable for the current renovations to Ross-Ade to occur. They only came to fruition after four bowl games and a Rose Bowl appearance. Hep managed to get a similar commitment from IU after only two years and not even a single bowl game. The expansion of Memorial Stadium will be his legacy in Bloomington, and if the Hoosiers turn it around from here and go on to build even a modestly successful program like our own in West Lafayette he will be remember as the foundation of that program.

Coach Hep may have only had a 9-14 (9-12 considering two of those losses were games actually coached by Bill Lynch) record in his two years in Bloomington, but he brought them a long way. Consider this: The last game that their previous coach Gerry DiNardo coached; his team got absolutely destroyed in the 2004 bucket game 63-20 in a game that wasn’t even that close. That day Purdue was the most dominant I have ever seen them offensively, and Indiana couldn’t have played better defense if they were allowed 15 men as defenders. The fact Purdue dropped two more easy touchdown passes in the first half means it could have been even worse.
Fast forward to last season. It was an ugly, ugly game in West Lafayette, probably one of the ugliest displays of football I have ever seen. Still, Indiana was right there in the game and two key plays, a fumble inside the five yard line and Jake Standeford’s punchout were the difference. In two years Coach Hep brought the Hoosiers from being utterly humiliated to within two plays of knocking of their hated rivals and getting to a bowl game.

I liked coach Hep. I thought he was a fantastic hire and I was looking forward to him improving Indiana so the IU-Purdue football rivalry would mean something again. In the last ten years we’ve had one IU win because of a monsoon, two relatively close games (2006 and 1999), and a whole bunch of blowouts. I have no delusions of seeing Indiana-Purdue unseating Ohio State-Michigan as the Big ten’s go to game on its final Saturday in November, but it would be nice to have it mean something again outside the state of Indiana. It would be nice to see ESPN go through the highlights on rivalry Saturday and give more than a passing mention and a score to the Old Oaken Bucket. Shoot, Harvard-Yale got more highlights last year than our game.

So where does IU go from here? It’s tragic that this is the second year in a row that a Big Ten team has to overcome the sudden, unexpected death of a coach. Last season Northwestern had a very young team that wasn’t expected to do much anyway, and some would say they still overachieved a bit in finishing 4-8. They too came close to a bowl game, blowing that infamous Michigan State game at home and losing to a 1-AA team. The Hoosiers have a guaranteed win to start the year in Indiana State. I will also give the Akron game and probably the Ball State game, even though the Cardinals nearly got them in Muncie last year. That means between Western Michigan, Northwestern, Illinois, Michigan State, and, yes, even us, they have five chances to pull off the other three wins they need. I don’t think bill Lynch is nearly the coach that Hoeppner was, and with Hep there would be little doubt in my mind the Hoosiers would go bowling this year. Lynch lost to a 1-AA team at home last year. I know there were other circumstances behind them, but there’s still no excuse whatsoever for a Big Ten team to lose to a 1-AA team at home. I think the Hoosiers will go bowling with the previous three wins, plus wins over Michigan State, Northwestern, and Illinois.

No matter what though, this will be the season that will be remembered in Bloomington as the season of Hep. If they go to a bowl it could spring board them into the next level as a program, which is a level already crowded in the Big Ten with us, Minnesota, Northwestern, and Michigan State as that middle tier. If they don’t go, it may be a long time before they come close again. Either way terry Hoeppner has left a lasting impression on this program, and I hate to see him go even as a Purdue fan. God bless him this day, and my prayers are with the Hoeppner and IU families.