Impressive. Most impressive. – Darth Vader, The Empire Strikes Back

I was impressed by a great many things from yesterday's game. First of all, I was very impressed by the sheer number of Boilermaker fans that made the trip. The crowd had to at least be 50/50 if not more because of Purdue fans. I don't know if that is a testament to Northwestern just having a really down year and not supporting their team or what, but several fans at least made the trip up to Chicago for the game. Northwestern certainly did not have enough fans, or even a reason, to ever get very loud and make things into a home-field advantage for them. The Purdue fans that did show up were loud and proud, something much needed on a bright but chilly day. From where we were sitting along the south end zone, there were several groups of fans doing the first down cheer, the third down cheer, and the Boiler Up.
Granted, we're not exactly Ohio State, Wisconsin, Penn State, or many other Big Ten teams that sell out opposing venues, but it was nice to see a good pro-Purdue crowd yesterday. I personally had no trouble scalping tickets just to get into the game, and we were able to pretty much sit wherever we wanted all day. Even when we had to move because of some drunk and belligerent college kids behind us (who eventually got kicked out), we were able to move to a place where we still had good seats.

As far as Ryan Field as a venue, I was not overly impressed. The concourse had more room to move than Illinois' Memorial Stadium, but the restrooms were tiny. When the line for the men's room is longer than the line for the women's room is, you have a problem. The closest venue that Ryan Field reminded me of was IU's Memorial Stadium. I like the seats really close to the field, especially the grass berm in the south end zone. It makes it nice when the action is down that way because you don't feel so elevated like you do at IU. Of the now six Big Ten Stadiums I have been to though, Ryan Field probably ranks at the bottom, just below Illinois. Although the concourse is much more manageable than Memorial Stadium, I just like the view from the seats at Illinois better.

As for the actual game, I was very impressed by what was by far our best, most complete game of the year so far. I know it is only Northwestern, but you have to be pleased by the fact that for once we took what was a terrible offense and shut them down as we should. There would have been major cause for concern had they been able to move the ball at will against us. They did so on the first drive, but after that the only points they got were off of an interception that gave them good field position. Most of the rest of their yards came in the fourth quarter when the game was already decided, and even then we were still aggressive and didn't allow a whole lot. 250 yard given up is fantastic for our D, and holding them under 100 yards passing is almost unheard of for us. It won't make things look incredibly better, but statistically we'll at least go up this week.

The front seven had a much better game, as they were aggressive in containing the run and getting to the quarterback. Four players had sacks, proving that we do indeed have more than Anthony Spencer on D, and we had five sacks total. We also had nine tackles for loss, and several for little to no gain. Only once did Northwestern really throw the ball deep on us, and they were successful on the long pass that set up their first score. The secondary was better, that is probably also because of a direct result of the front seven playing better. I have said all along that we could have Ed Reed, Deion Sanders, Ronnie Lott, and Champ Bailey in our secondary and they would still get torched if the front seven didn't play better.
Offensively, I was kind of surprised that we didn't get more from the ground game. When the passing game is working though, why step away from it? I would like to see us run more spread option like we did last year, because against better opponents it will allow us to control the clock more. Sheets had a bit of a disappointing day, as he could never seem to get in the clear. I know Taylor also got more of the snaps than he has in the past. His touchdown run was excellent, and he did a good job of keeping the defense off balance.

I love how we were able to still run a very obvious play though. In the fourth quarter, when we lined up five wide from the four, I said to those around me, "Gee, this isn't an obvious quarterback draw or anything. Sure enough, Painter goes up the middle for four yards and gets in. That's simply a great job by the O-line getting a push and creating space. We did what we needed to do in taking advantage of an overmatched opponent. Paint went out and calmly set another career high, and it appears that Drew's single season passing mark is in serious jeopardy. It should be noted, however, that Brees set it in a 12 game season and did not get to count his bowl game statistics, while Painter will get at least 13 games and likely a bowl game in order to add to it. Still, he is putting up some very impressive numbers and aside from his interception, played a much better game this week. He spread the ball around and was in control he whole game.

Two others that need mentioning are Greg Orton and the offensive line. Orton didn't find the end zone, but talk about being a possession receiver and moving the chains. He seemed to be there every time we needed 5-10 yards, and Northwestern certainly could not figure out the 3 step drop and toss out over to him in open space. Secondly, the offensive line, aside from those back to back sacks, gave Painter all day to throw. There was one specific instance where Paint stood in the pocket for about five full seconds, calmly scanning the field to find Keller over the middle for an easy first down. That's very impressive.

As I said in my preview of this week's games, we needed to come out and make a statement against an inferior opponent in order to gain some respect. That is exactly what we did. Aside from the first drive, we kept them in check and never let them seriously threaten us. Even when it was still a 1 score game midway through the third quarter you felt confident that we were going to hang on as well as the defense was playing.

Even on special teams we got a boost, as Royce Adams, who also had a very big interception, found some room in the punt return game. I know part of the reason we don't have much success in returning punts is simply because we haven't had many punts to return, but his return was big no less.

There were, of course, some minor nits to pick in this one, one big one being that we left a lot of points on the field. We stalled a couple of drives in the red zone again, and missed field goals led to nothing. We easily could have scored about 20 more if not for that, plus the play at the end of the half when we ran out of time. Chris Summers is going through some freshman struggles right now. It's one thing to miss some field goals from 40+, but to miss the two he did are a sign of some struggles he needs to work through. They didn't end up costing us in this game and he is still very young, but it is something that could bite us in the future. Again, he has done fairly well to this point of the season when you consider he's a true freshman who wasn't even offered a scholarship. He also has the added bonus of his distance. You can't teach distance, and I am confident in his ability to at least get the ball there. The accuracy will come.

The first drive was once again a trouble spot. We had a chance to really go in and get up early, but we have a missed field goal then immediately give up an 80-yard touchdown drive. Credit must be given to the way we recovered as a whole, however, and only gave up three points the rest of the way.

All in all it was a very pleasing day as a Purdue fan, as we took a team that comfortably beat Miami (OH) and handled them in their own place. That in itself should tell how far we have come. It will also be encouraging to our defensive unit as a whole that for one week they are the focus of positive talk as opposed to negative talk. We're 5-2 now, right where most people expected us to be coming into the season. We've also responded in the biggest "games we should win but could lose" tests so far. Two more wins are needed for a bowl, but this team is starting to look like one that won't squeeze into one at 7-6.

UP NEXT: Week 7 reactions from around the conference (Where did that come from in Bloomington?) 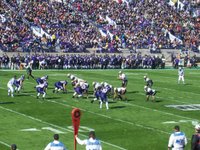